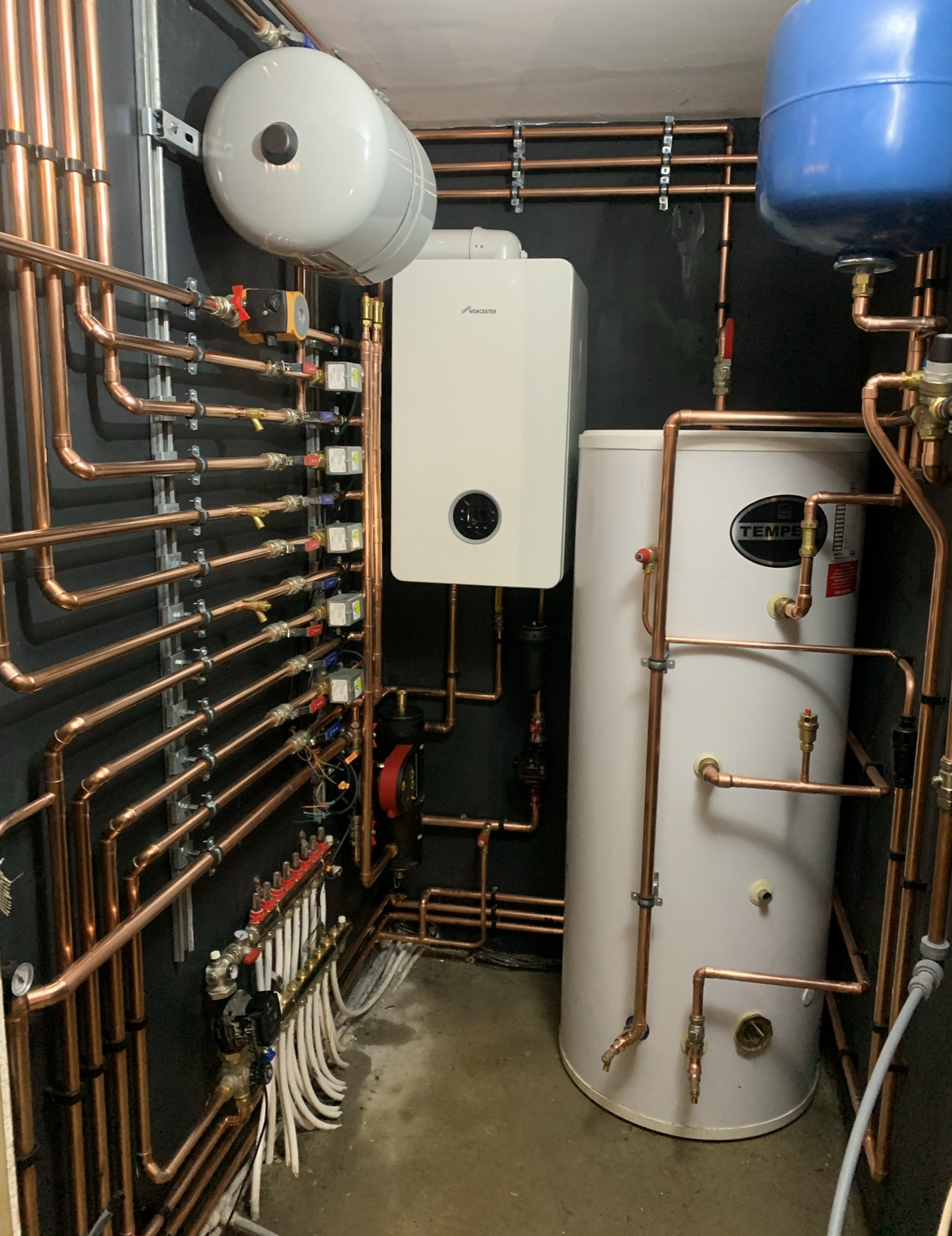 Where do I start with this one? This was a new build project and the customer had a hands-on builder. They spent a lot of money on the plant room for this massive house and it wasn’t working properly at all. In fact, it was dangerous. Each circuit had its own pump apart from the hot water, and because it was a heating only boiler it meant that the hot water circuit didn’t get hot. They had fitted the unvented cylinder without the expansion vessel connected. There was also no expansion vessel connected to the sealed central heating system. The electrics were all wrong and the gas pipe was laying on the floor live outside the property. None of the existing pumps were working correctly and, because of the different appends and velocities through the system, they had major circulation issues. Due to the fact this was a brand new system, I tried to salvage as much of what I could to save the customer money.

I opted to relocate the boiler to make room for the pipework to be independently zoned, so that each zone could be isolated enabling work to continue in the house without draining the entire system. I added a low loss header to relieve the boiler and assist with the circulation. I installed one large pump to circulate the zones rather than the independents. Although the low loss would have alleviated most of the independent pump issues, the customer preferred the idea of having a main circulation pump governing the zones with the underfloor pump working independently. I advised the customer on the best radiators to fit for efficiency rather than just aesthetics. I also chose specific radiator valves to assist the new flow rates and maximise efficiency of the system. I refitted the gas and completely redesigned the system layout.

I pre-planned everything by drawing out the design before executing it. I completely rewired everything too, and created independent wiring centres for some valves and thermostats to stop the cables bunching in the main wiring centre. The system is now operating beautifully, the entire house is working as it should, and the customer is over the moon.

Most of the parts were salvaged as they were only weeks old. I installed a Worcester greenstar 8000 40kw regular boiler, Grundfoss magna1 pump to help the system’s circulation, 1” low loss header helped relieve the boiler so it could heat the system equally, and Stelrad soft line radiators throughout for maximum efficiency of heat output. I also chose Danfoss ras-b2 radiator valves to assist the hydronic balance of the system, aiding even heat distribution. I then installed a Ups3 as a secondary pump and Honeywell home zone valves which were salvaged from the original install.

This project stands out to me because I have never overhauled something that was in such a bad state. Not only was it all incorrectly installed, there was no care or thought given to the planning and installation of the previous job. The pipework was shocking and soldering a mess. The customer was nearly in tears when they called me in for a meeting to discuss what could be done to save the job. I could only save components, everything had to be ripped out and redone properly. Once I assured the customer of what I was going to do, they started to get confidence in me and day by day of the install I could see how happy they were becoming as I was adding to the job.

I took possibly the worst job I’d ever seen and turned it into one of my best within 4 days. I’ll never forget how grateful they were, it really made it all worth it. They trusted me and the process and didn’t oppose me on my use of proper brands to execute the overhaul properly.

The system is now working correctly. With the components fitted it stands the best chance of efficiency against the large demand of such a big house. As the boiler was focusing on heating the whole system rather than the individual circuits, the energy bills were a lot higher:  they’ve now lowered drastically as the system is running much more efficiently. The customer isn’t sleeping in fear that something is going to go bang.

I’ve also been able to alleviate stress for the customer in the future as the system is now completely leveled out. Plus, by zoning each bathroom individually, if any problems do occur in the future, it’ll be easier to isolate them and work on them individually without affecting the rest of the house. From this job, I’ve now worked on another part of the house for the same customer and my Instagram photos of this specific job have led to a number of new customers who were wanting a similar system put in. It’s brilliant when others look on and tell you that you’ve done a good job, and want to hire you, but above all it’s great to be trusted and to know I’ve made a difference to someone’s life.