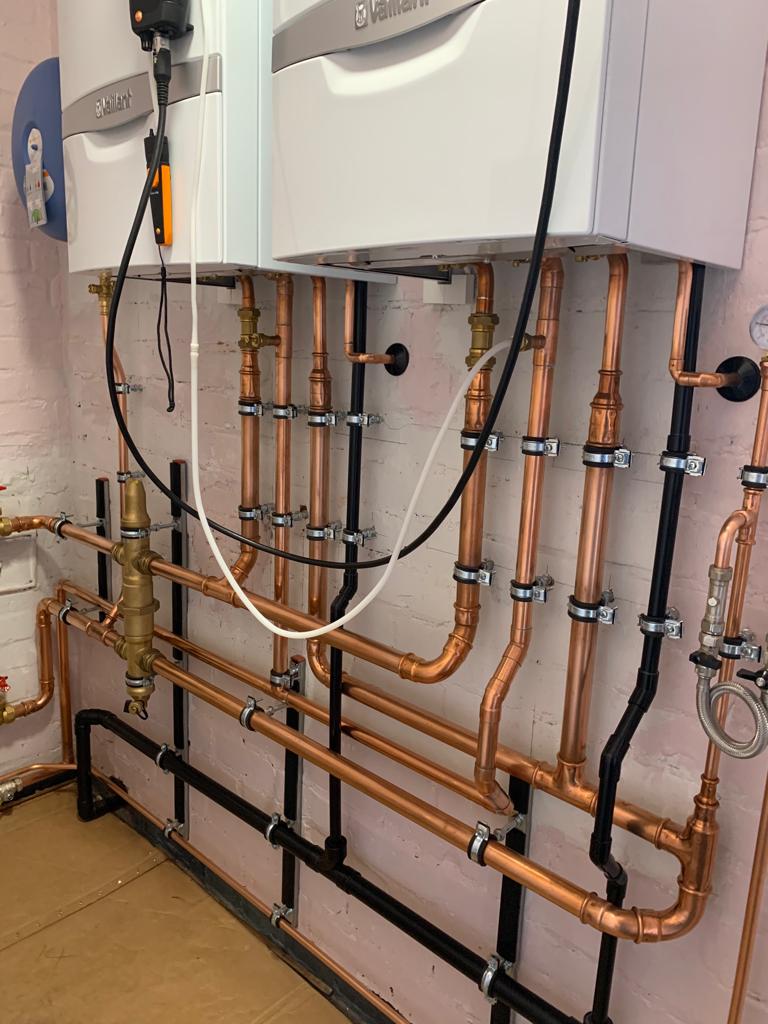 I was recently called by a customer who was having problems with his oil-fired central heating boiler, so I visited the property to do a site survey and diagnose the problems. The property was large, containing 40 radiators, 4 bathroom suites with three open vented cylinders, and even a swimming pool. Whilst I was doing the site survey with the customer, he told me that the company that he had a contract with – who usually looked after his boilers – had been coming out at least twice a week to fix the oil boiler (or I should say, get it going again)!

So, we spoke at great length and came up with a plan to remove the oil-fired central heating boiler and install a natural gas one. There was already a gas meter at the property feeding the swimming pool boiler, as well as a small system boiler inside the main house which meant that it wouldn’t be too difficult to swap the boiler to natural gas. However, there were a few of things I had to consider; the customer wasn’t particularly technically minded and he didn’t even have Wi-Fi in this house, so controlling the system needed to be simple but still comply with boiler plus. In addition to this, I had to consider the sheer volume of radiators – 40 in total – despite the fact he only ever had three radiators turned on at one time. And finally, I had to bear in mind that the customer was also considering selling the property within the next two years.

All things considered, I set about designing the heating system to suit his needs and overcome the pitfalls that were presented to me. I decided to install 2 x Vaillant System boilers. This would provide the total heat requirements for the property and coupled with an IMI low loss header, it made a neutral point in the heating system and meant that both boilers would work happily and circulate around the low loss header. This made a huge difference as the standard pumps from inside the boilers would have struggled to pump around the whole house radiators. Once a demand for heat was present, some valves would open up allowing the heat to pass through the low loss headers which also meant that a much greater size pump could be installed on the outlet side of the header without damaging the boilers.

As well as doing a reverse return circulation to help with even heat distribution across the boilers, the biggest challenge with this job was managing the heat needed for the 40 radiators. The boiler that I was taking out was a 70 kW oil boiler. I heat calculated the radiators and heat calculated each room and found that the house needed about 60 kw of heat output so installing modular boilers would work perfectly because I would then be able to manage the heat a lot more effectively due to the fact that I could range the rate for each boiler down to a minimum of 12 kW and then ramp them up to a total of 60kw, if needed. This meant that, in effect, I was future proofing the house for a bigger size family for when the customer did decide to sell the property.

The other issue I had was the ability to hydraulically pump the water around a heating system of 40 radiators where a customer would only ever turn three of them on. The system would require a considerably big pump to cope with high demand but would also need to possess the ability to modulate down in order to effectively pump 3, 12 or 20 radiators at a time as I knew the customer would turn everything off after commissioning. So, I opted to install a Grundfos Magna 3 circulator pump as this has the ability to adapt to your heating system, and allows you to set a flow rate, put it in SmartMode auto adapt, or into ‘learn mode’ – in fact, there are 7 modes to choose from. I selected auto adapt mode as this would mean that the pump would be able to sense if it needed more flow rate when the system was fully opened up, and could also sense if it needed less flow rate if radiators were turned off. This was an absolutely perfect setting for this specific situation.

When I moved on to programming, I realised that using a basic programmer on this install didn’t really do the boiler and the system justice. However, of the two people that were going to be turning the system on (the customer and the housekeeper) I knew it needed to be simple, as neither of them had any technical knowledge and I believe that you have to match the controller to the specific customer’s needs in order for it to be 100% right. A complicated controller would not have worked as I’d have been constantly called back out. Additionally, when somebody else bought the property later down the line, who would likely install WiFi, they would be able to upgrade the controls. This is, again, another one of the reasons that I opted to fit a Vailiant boiler, as you can use the brand’s own eBus or 240v controls.

On this particular job I decided to do all of the work needed from the electrics down to the roof work, as well as painting the boiler room a delightful colour of pink because it was the customer’s favourite colour and it matched the home’s décor. By doing this, I was able to be consistent and ensure that all of the works were carried out to my high standards and I think the photo will prove that.

The products I decided to use on this particular job are based on the many years I have worked as an engineer. From my point of view, these are the very best and were perfectly suited to the individual needs of this project. I have listed many reasons for utilising these products above, but one of the main reasons I used the Vaillant boilers was because they come with a 10-year warranty, which makes good sense and gives my customer peace of mind, plus they are also very easy to service. I used an IMI all-in-one low loss header solution, cyclone filter, magnet dirt separator and micro bubble separator because I have used one in previous installations and know it is a high-quality, reliable product, which is constructed much better than most expansion vessels / loss headers. Plus, it also comes with a five-year warranty, again, providing peace of mind to me and the customer.

As for the pump, I chose it because of the seven modes you can set as well as the auto adapt feature, which was a huge benefit to this project. The pump is also easy to install, which ensures that the process was trouble-free. Another couple of reasons I chose this pump was because of the ten-year warranty, the fact it is easier to service than many other pumps, and also the fact that the stainless-steel heat exchange and parts are much more readily available.

This may not be the most technically advanced installation that you will ever see, but the reason that I’m so proud of it is because I managed his expectations, ensured the controls and systems were suited to his needs and the needs of the property, and that the products were of the highest quality and had long warranties.

My customer has lived with the converted heating system now for best part of the winter with his three radiators turned on and he’s very happy with how the system is working, and with the controls. My customer now has peace of mind that his heating system is efficient, and that it comes with a long warranty. He has also saved money due to the fact that the old oil-fired boiler was costing him an outrageous amount in call outs, and he has even come back to me with more work because he thought that the installation was excellent – I will now be replacing his swimming pool boiler too because this has sprung a leak and rusted through the heat exchanger! I was pleased that he provided such positive feedback and is now coming back to me with more work, but above all, he now also has a beautiful pink boiler room to admire!