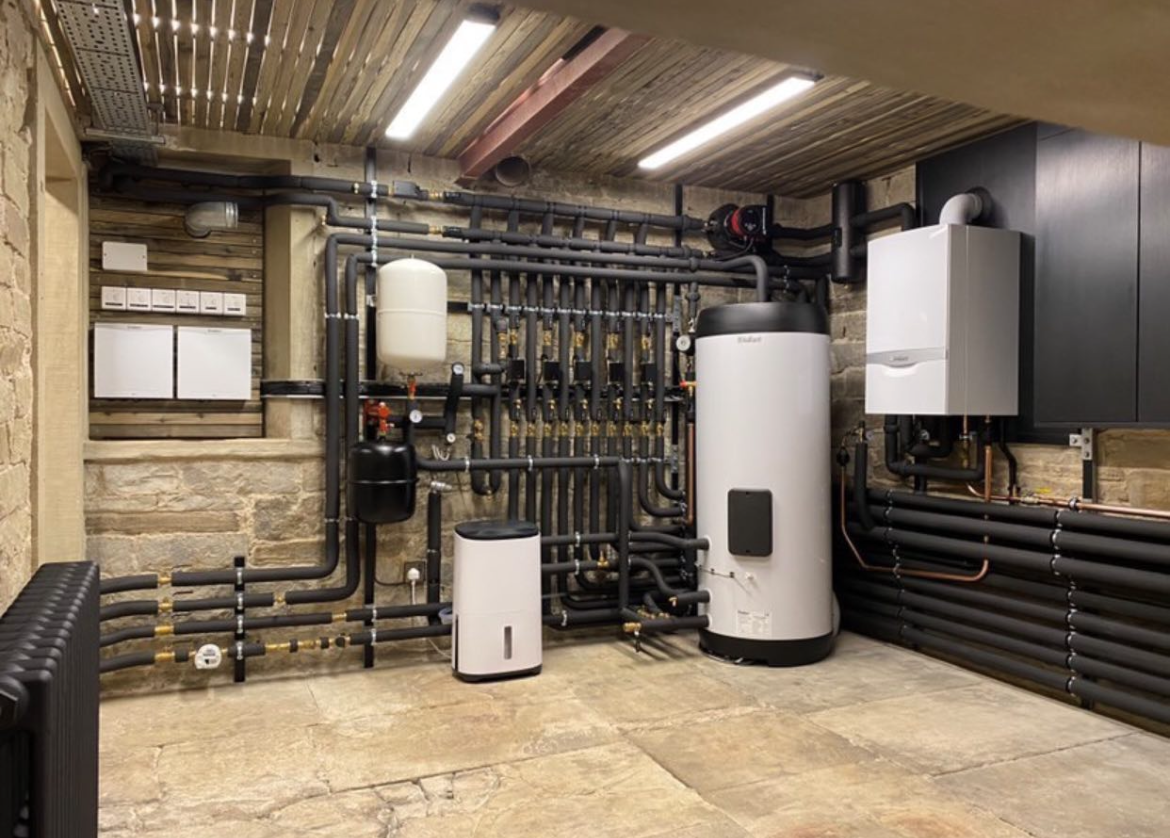 The customer first approached me about an ongoing issue he was having with two combi boilers (Alpha & Ravenheat) that were old and horribly inefficient. After arriving at the property, I realised one boiler was in the kitchen on a wall that was being knocked down, the other was located in a bedroom tucked away in the corner. I asked the customer if he had explored the option of an unvented system, to which he replied yes, but wanted my opinion on where to site the boiler, cylinder and pipe work. I asked him where he would preferably want the plant locating and he insisted to showing me the cellar. The house was built in the Georgian era (1714-1830ish) and it was built on solid sandstone foundations and the cellar was also crafted from blocks of sandstone.

The customer asked for my opinion on the boiler location specifically and I advised to use an original coal shoot as a flue route as it could be made accessible for servicing, he agreed with me and then watched me admire how the house was constructed and took measurements and pictures to take back to the office and start doing some heat calcs and a price for all the work he wanted doing throughout (ripping the two separate combi systems out and the complete house running off one system but split into 4 heating zones). The main challenge with this install was honestly the location of where he wanted the boiler. As it was such a small space and a listed building I was limited to where I could put things going in and out of the install – with some things not feasible at all.

After installing the new system, the customer instantly noticed the benefits from having an unvented system, not only did it solve the problem of multiple rooms not reaching temperature, it also gave him excellent hot water flow rates for a domestic property, which made his rainwater shower flow like it should do instead of being a weak dribble. The customer and his family were very pleased and I really enjoyed doing this project.

Valliant EcoTec plus System boiler, Vaillant UniStor indirect hot water cylinder, Grundfos Magna 3 circulating pump, Spirotech Low loss header with air/dirt separation, steel channel with rubber lined clips and Armacell insulation to finish it off properly. These are the products I use regularly and are happy with. I know they’re going to be reliable and give the customer the best system with guaranteed warranty.

The cellar had been converted by the previous owners into a modern-ish utility room with cupboards everywhere. The customer ripped everything out to uncover the original Georgian stonework and went the extra mile by getting the entire space sandblasted back to bring out its true beauty. The house was totally unique to anything I had ever come across before and I had a strong feeling that I had to create something that the house truly deserved, not only in terms of heating and hot water efficiency, but pride in the work that was being carried out to align with how the house was originally built way back in the day.

No more call outs, reduced energy bills, a happy wife and a happy daughter (as well as complete control over the entire house and the hot water schedule from an app on his smartphone). They have a system that is working perfectly for their house which gives them excellent hot water flow rates and every room is now capable of reaching the max temperature.