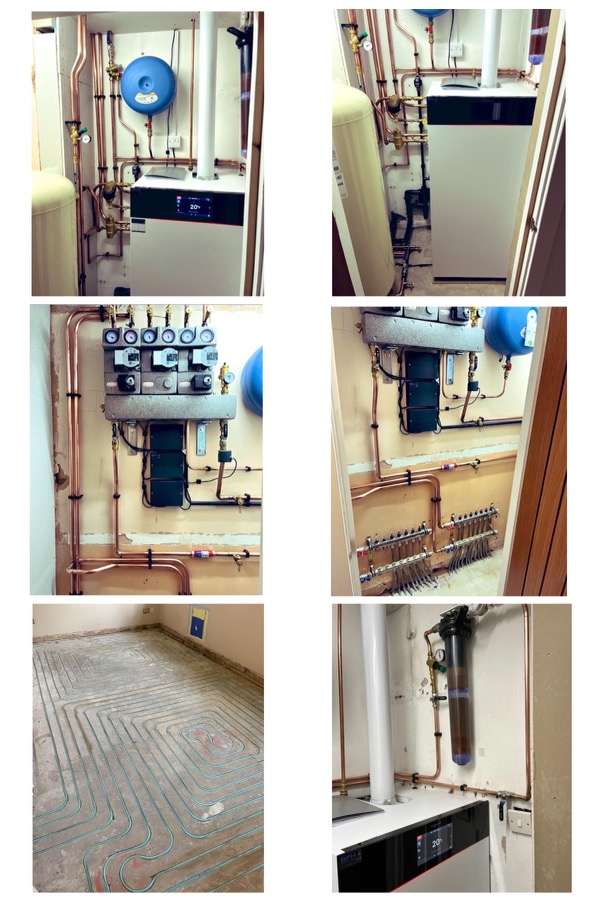 A project I’m particularly proud of is one I completed for an existing customer. They contacted me about their current heating system in their new property after fitting a low temp heating system in their factory earlier last year.  They had reservations about having two boilers, however, on arrival I had to shut off one boiler due to safety issues with the flue. There was 76kw currently feeding the property and after speaking with them I learnt that this was going to be their forever home, so I decided I needed to install the best possible system for them. I also wanted to take into account the possibility of upgrading the system with renewables in the future, even though they weren’t interested now.

After conducting a full heat loss I worked out the property needed only 21kw of heat with a few alterations to the insulation in the loft. The first major challenge was that it was a block and beam build and the customer was over 6ft tall so any raising of floor height wasn’t a possibility. Radiators weren’t going to satisfy the heat loss without being dramatically oversized which would have looked out of place in this modern style home. My plan was to split the home into 2 zones using 1 mixed and 1 unmixed circuit with the upstairs, downstairs and the bar all to consider. Looking at different solutions, I decided to use a company called JK heating. They cut into the floor with grinders, which was possible due to the block and beam construction and was the right solution for our customer as it avoided any build up height.

After speaking to them we decided to go ahead with underfloor heating project throughout the property running two different zones. The problem here was they wanted carpet upstairs and tiles downstairs which dramatically changes output. After playing around with pipe centres and the tog ratings on the carpet, I worked out that I had to run the upstairs 8° hotter than downstairs to get the required output due to the 2tog carpet they wanted. This is where the mixers came into play, after playing with pipe centres and flow rates I worked out I could run upstairs at 49° on design day which is -2.2° for us here. Which meant the boiler would fully condensate 100% of the year maximising efficiency.

My proposal was to fit a Viessmann 222 35kw boiler on weather compensation, range rate the heating down to the 21kw, add a header and use 3 circuits to supply the whole house. I went with the 222 as hot water production on this unit is great, it’s 100L cylinder that is plate loaded on priority. The house has 4 bathrooms, 3 en-suites and a main bathroom so we also added a Stuart turner mains boost 350 to provide additional flow rate during peak demand.

At this point we had ripped the existing system out expecting possibly 12 months to renovate the whole property. We supplied electric heaters and kept the smaller boiler running the hot water in one part of the house for washing. They were also living in the property so we moved them into the living room downstairs. We got the upstairs underfloor heating in, in 4 days and then took two days to lay the 5mm screed. We went with a low mass finish on the screed, due to floor height build up but also because there wasn’t any slab to heat up and it went into the room quicker. We then got the boiler up and running temporarily upstairs so they could have that renovated and move from downstairs to upstairs.

At this point we were 6 months into the renovation and found out the lady was pregnant and they wanted the house finishing before the baby came which gave us 6 more months to get it all done. This was a particular challenge as the schedule everyone was working on had been changed and was being pushed, which meant things had to move faster at this point.

The next stage was to get the underfloor heating cut in downstairs but at this point they had changed their garage plans into a gym so that was 3 extra loops needed onto the manifold. With the original manifold position, we couldn’t get the extra loops down the hallway to the gym so we had to add another manifold in the gym. This created extreme difficulty as we were using the existing risers built into the property. I got an idea together to try and use the cavity into the garage by removing a few bricks internally and feeding it up through old cavity before the garage was built. Luckily this worked. At this point we got the underfloor heating running downstairs too on both manifolds.

Now with the build ongoing they wanted towel rails in their bathrooms which wasn’t part of the original idea, and they wanted to have these on during the summer months. They didn’t want electric due to the costing of them and wanted them ran off the boiler. However, I didn’t want to sacrifice running higher temps too so I decided to add another mixer and had these on the unmixed circuit running 50° on design day. The system was all done in copper and soldered, all together I ran, clipped, lagged and soldered over 250m of pipe work, majority of it in a loft.

On the system I used certain products. The manifolds were imi dynacon ones, as they allow you to set the correct flow rate on the loops via the hytools app so that they are fully balanced. We also used the imo statico and aquapresso expansion vessels. The system has been up and running 4 months now and as I have found before, heat loss surveys are always oversized, we have already dropped the curve on the upstairs to provide a flow temp of 43° at design day temp. The amount of condensate being produced by the boiler currently is crazy. The house now runs at 20° throughout the day down at 1.7kw and then has a setback of 17° during the evening. It is all controlled via the viessmann vicare app and I also have remote access via the Vitoguide professional app to change anything that needs to be changed and that, if any faults occur, I can be made aware.

Water quality is also a big issue so we don’t use chemicals to treat our systems. I chose to follow the guidance of vdi2035 which is a German standard. This promotes chemical free system water and by controlling the waters make up we can slow corrosion some drastically. This time we used the first Spirotech spirofill fill and refill system to be fitted in the UK, this lowers water hardness, lower conductivity and gives a ph level of 8.4, ideal for a stainless steel system (heat exchanger and the radiators). We then record the results and will reset annually each year.

I think this project stands out to me because of just how big the install and job was. There were so many moving parts to consider on completing this job, with the customer requiring a range of different solutions within their heating system. I had a number of challenges to overcome as the job progressed; the radiators not satisfying the low temperature, running the underfloor heating at different temperatures due to the different flooring upstairs and downstairs as well as changing layouts and building plans. Also being up against a tight time frame with the changing deadline mid install, really meant I had to reassess the project and work at a quicker pace to make sure everything was completed before the customer gave birth.

The result for the customer is that their heating bills have lowered as they’ve gone from using 76kw of heat in the property down to 21kw, which is a dramatic difference. They can also benefit from a comfortable house as they can heat it at all times without worrying about spending too much money. The heating system will vary with the outside temperature meaning there’s no maintenance needed from the customer. I also have remote access to the heating system which means it’s trouble free for the customer, they can simply contact me with any problems and I can fix them straight away. I made sure to future proof the property as well, meaning the move to renewables will be much easier for them should they choose to go down that route. Overall, the customer is incredibly happy with the final result of the install and have since recommended me to their neighbours who I’m quoting for at the moment. I’ve also fitted a boiler for them in one of their factories, so I’ve had more work from the customer themselves as well.